I hope the summer finds you well and sun is shining when required. As you may have seen the latest spaceship album, ‘a prospect of loughton brook‘, received some great reviews, including in Electronic Sound and Shindig magazines. Tracks also got airplay on Gideon Coe’s 6Music show, Pete Paphides Soho Radio show and a number of other plays online and over the airwaves. 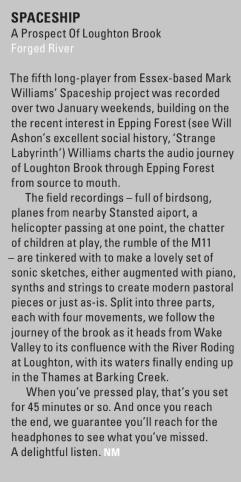 The initial run of 50 deluxe CDs has now sold out, but a second edition is available for pre-order, in slimmed down packaging, for anyone who missed out.

Coming soon there will be a new album, preceded by an EP. The album is called ‘fields 2: from the sea to the moor, via the forest and the

stones’. Like 2016’s ‘fields: churches and rivers’, the tracks were recorded out on location but, whereas the first album was made using mostly acoustic instruments, these tracks are mainly made using a variety of iPad apps played through a speaker and recorded, along with any ambient noise, with a microphone. There is also a dusting of rudimentary alto recorder. 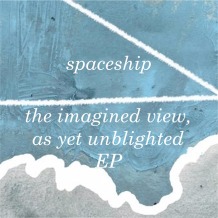 The music was recorded in a number of locations in Essex, Yorkshire and Kent, including three tracks recorded in Epping Forest. The preceding EP takes a track from the album, ‘the imagined view, as yet unblighted’ (recorded at Coldrum Long Barrow in Kent), and to it adds three additional pieces recorded at pre-historic sites in Cornwall. The EP will be released on 3 inch CD followed by the album in the usual deluxe, recycled card packaging. Artwork for both releases comes, as is becoming tradition, from the excellent Maxim Peter Griffin.

The EP will launch on 25th August, with the album following in the autumn. All the best for the rest of the summer.